I’ve posted Chapter Two of The (new) Quantum Rose on my Patreon page. You can find it by clicking here.

The original The Quantum Rose won the Nebula Award for Best novel. 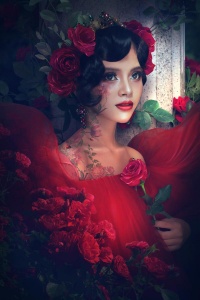 Here is the first scene of Chapter Two.

Jul, the sun, had sunk behind the trees by the time Kamoj and Lyode walked around the last bend of the road, into view of Argali House. Seeing her home, Kamoj’s spirits lifted.

Legend claimed the house had once been luminescent pearl, all one surface with no seams. According to the temple scholar, who could read bits of the ancient codices, the ancients had grown Argali House in a huge vat of liquid, on a framework of machines called nanobots, which supposedly were so tiny you couldn’t see them even with a magnifying glass. After these little machines completed the house, supposedly they simply swam away and fell apart.

Kamoj smiled. Absurdities filled the old scrolls. During one of her visits to Ironbridge about ten years ago, Jax had shown her one in his library. It stated Balumil, the world, went around Jul in an “elliptical orbit” and rotated around a tilted axis. This tilt, and their living here in the north, purportedly explained why the nights lasted such a short time in summer and went on for so long in winter, fifty-five hours of darkness at the solstice, leaving only five hours of sunlight.

None of the scrolls, however, shed any light on why her people had such a strange manner of counting time. One year consisted of four seasons, of course: spring, summer, fall, winter. They called it the Long Year. A baby could come into the world, grown up, wed, and have a family all within one Long Year. For some reason the ancestors considered this a long time: hence the name. Even more inexplicable reason, they divided the Long Year into twenty equal time periods they called short-years, five per season. So each season lasted for five short-years. Most people Kamoj knew, including herself, simply called them years. But really, it made no sense. What call it a short-year? The only hints came in a note scribbled in the margin of one codex that said this odd designation came about because the short-year about matched the time span of a “standard” year.

Still, Kamoj found it more credible than too-little-to-see machines. Whatever the history of Argali House, it consisted of wood and stone now, both the main building and the newer wings that rambled over the cleared land. Huge stacks of firewood stood along one side, stores for the winter. Seeing them gave her satisfaction, knowing that they had their preparations for the harsh winter well under way.

Bird-shaped lamps hung from the eaves of the house, rocking in the breezes, their glass tinted in the Argali colors: rose, gold, and green. Their radiance created a dam against the purple shadows that pooled under the trees, and the welcome sight spread its warmth over Kamoj. Here in the road, they walked past a fluted post that stood like a sentinel. A lantern molded and tinted like a rose hung from a scalloped hook at its top, its glow beckoning them home.

They entered the courtyard in front of the house through an open gate engraved with vines. Five stone steps ran the length of the house before them, leading up to a wide terrace, and five doors were set at even intervals along the front. The center door stood larger than the others, stuccoed white and bordered by hieroglyphs painted in rose, green, and gold, with luminous blue accents.

As they neared the house, voices from inside drifted out to them. By the time they reached the steps, it had resolved into an argument between two men.

“Maxard too.” Kamoj paused, her foot on the first step. Now silence came from within the house.

Above them, the door suddenly slammed open. Maxard stood framed in the archway, a burly man in old farm clothes. His garb startled Kamoj more than his sudden appearance. By now her uncle should have had on full ceremonial dress and mail, ready to greet Ironbridge. Instead he looked as if he hadn’t even washed up since coming in from the fields.

He spoke in a low voice. “You better get in here.”

She hurried up the steps. “What happened?” Had she offended Jax more than she realized?

Maxard didn’t answer, he just moved aside, letting her stride into the entrance foyer, a small area paved with white tiles bordered by Argali designs.

Boots clattered in the hall beyond—and Jax swept into the foyer with five of his stagmen. He paused in mid-stride when he saw Kamoj. Then he stalked past her and went to Maxard, towering over the younger man.

“We aren’t through with this,” Jax said.

“The decision is made,” Maxard answered.

“Then you are a fool.” Jax turned to Kamoj, his face stiff with a guarded emotion, one he hid too well for her to read. In all the years she had known him, he had never shown such a strong response, except in anger. This however felt different than rage. Shock? Emotional pain?Surely not from Jax, the pillar of Ironbridge. Before she had a chance to speak, he strode out of the house with his stagmen, ignoring Lyode who stood just outside the door.

Kamoj turned to her uncle. “What the blazes happened?”

Maxard shook his head, his face creased with strain. Lyode came up the stairs, but when she tried to enter the house, Maxard stretched out his arm, putting his hand against the doorframe to block her way. He spoke with uncharacteristic anger. “What blew into your brain, Lyode? Why did you have to shoot at him? Of all days I didn’t need Jax Ironbridge angry, this was it.”

“He was mistreating Kamoj,” Lyode replied.

“So Gallium Sunsmith says.” Maxard frowned at Kamoj. “What were you doing, running around the woods like a wild creature?”

Kamoj stared at him. She always walked in the woods after she finished working in the stables. Maxard often came with her, the two of them discussing various projects for Argali or just enjoying each other’s company. She didn’t bristle at him; this was too far outside his congenial nature to make sense.

He pushed his hand through his dark hair. “Can we meet in the library to talk later? You’ve several petitioners waiting for you now.

She studied his face, trying to fathom what troubled him. No hints showed. So she nodded, to him and to Lyode. Then she limped into her house.

← Back to All News