I’m running a Tuckerization contest on my Patreon page.

You may have heard the term before; Tuckerization is using the name of a real person as a character in a book. It comes from the author Wilson Tucker, a science fiction writer and prolific sf fan and editor, who often used the names of his friends for his characters.

In the next two weeks I’ll be posting scenes from various of my novels on my Patreon page. Out of all the scenes I post, four will involve Tuckerizations. If you are the first person to get all four, you can select any book or record you wish from the Starflight Music and Books catalogue and I will send it to you.

Tuckerization may be a homage by the writer to a friend or fan. Which I’ve done. Writers sometimes donate them to charities, so whoever wins the auction for the Tuckerization gets to be in the author’s book. I’ve done a number that way, also. Someone may win them as part of a promotion or contest, like a reward in a Kickstarter campaign or a membership perk for a high level in a webzine subscription (Baen had a number of its authors participate in those, including myself). Or it could come about in another way.

Tuckerizations are usually cameos or small parts. However, they can be continuing if an author is writing a series. They are fun and a popular trope in science fiction.

If you get all for the scenes I post from my books, put a note in the comments section on my Patreon page.

1. Not all the scenes I put up will have Tuckerizations.

2. If the first person to get all four is one of the people Tuckerized, they still win the prize, but it will continue for everyone else until someone wins who isn’t in any of the scenes. So the contest will have more than one winner in that case. That’s because the person Tuckerized only has to figure out three of the four.

3. Starflight Music and Books currently doesn’t list the vintage record LPs in the catalogue. No worries! I will get those up before the contest finishes.

The first entry is from the book Carnelians. I’ve tried to pick scenes that are mostly self-contained.

Carnelians, by Catherine Asaro
From Chapters X and XI

“I’ve never been in the sky.” Aliana sat in the co-pilot’s chair, gazing out of the windshield … (To see the rest of the scene, go to my Patreon page.). 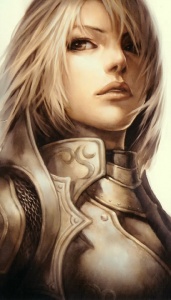 Edit: I found this picture years ago on the web that looks like how I imagine the character Aliana, but I don’t know how to give it a gold tone for her skin. Anyone here know photoshop? Also, I didn’t note the web site for the picture. If anyone sees it online, please let me know so I can give the artist proper credit. Thanks!

← Back to All News