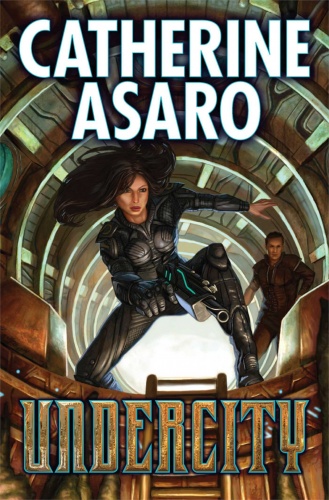 Book 1 in the Major Bhaajan Mysteries

Major Bhaajan, a former military officer with Imperial Space Command, is now a hard-bitten P.I. dealing with more baggage than any traveler through life needs. She takes clients whose woes can be personal or galaxy-shattering, and often both. Bhaaj search takes her deep into the mysterious and deadly Undercity—beneath the capital of a interstellar civilization. What she discovers could change the course of a star-spanning empire.

Book 1 in the Major Bhaajan Mysteries 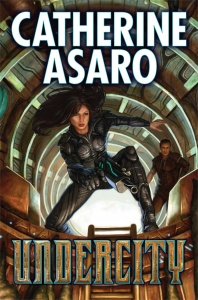 Chapter I: The Offer

The flycar picked me up at midnight.

Black and rounded for stealth, the vehicle had no markings. I recognized the model, a Sleeker, the type of transportation only the wealthiest could afford—or the most criminal. If my client hadn’t told me to expect the car, I wouldn’t have gone near that lethal beauty. I just wished I knew who the hell had hired me.

The Sleeker waited on the roof of the building where I lived. As I approached, an oval of light shimmered in its hull. A molecular airlock. Why? A vehicle needed that much protection only if it intended to go high into the atmosphere. We could be headed anywhere on the planet.

I had no wish to leave town. I had a good setup here in Selei City on the world Parthonia, the capital of an empire, jewel of the Skolian Imperialate. Droop-willows lined graceful boulevards and shaded mansions under a pale blue sky. It was far different from the city where I had spent my girlhood, a place of red deserts and parched seas.

The luminous oval on the flycar faded into an open hatchway. A man stood there, tall and rangy, wearing a black jumpsuit that resembled a uniform, but with no insignia to indicate who or what he served. He looked efficient. Too efficient. It made me appreciate the bulk of the EM pulse gun hidden in a shoulder holster under my black leather jacket.

Normally I wasn’t one to attribute details of clothing to the way people looked at you, but this stranger definitely watched me with a hooded gaze. I couldn’t read anything from his expression. As I reached the vehicle, he moved aside to let me step into its cabin. I didn’t like it. If I boarded, gods only knew where I would end up. However, this request for my services had come with a voucher worth more than the total income for every job I’d done this last year. I’d already verified the credit. And that was purportedly only the first payment. Of course I’d accepted the job.

However, certain types of clients didn’t like questions. If I asked too many, this pilot would leave. Without me. Credits gone. No job. I could walk away from this, but I needed the money. I didn’t even have enough to pay the next installment on my office loan.

And I had to admit it: I was curious.

I boarded the Sleeker.

Selei City spread out below the tower. The landing pad on my building was high enough that individual skyscrapers and magrails of the metropolis weren’t visible, just a wash of sparkling lights. I reclined in a seat with smart upholstery that adjusted to ease my tensed muscles with a finesse that only the most expensive furniture could manage.

I was the only passenger. The cabin had ten seats, five on my side separated by a few steps from five on the other side. The white carpet glinted as if it were dusted with holographic diamonds. Who knew, maybe they were real gems.

Flycars usually had a pilot and copilot’s seat in the main cabin. This one had a cockpit. The membrane separating it from the cabin irised open for the pilot and he left it that way. Everything looked normal when he slid into his seat—until a silver exoskeleton snapped around his body. If that mesh worked like the ones I knew, it was jacking prongs into his body, linking the flycar to his internal biomech web, which would include a spinal node with as much processing capability as a starship. Few people carried such webs inside their bodies, only military officers, the exorbitantly wealthy—and those who worked for the most notorious criminal lords.

The pilot looked back at me. “Yes?”

“I was wondering what to call you.”

He regarded me with his unreadable dark eyes. “Just Ro.” His face remained impassive. “You had better web in, ma’am.”

Ma’am. A polite crook? Interesting. I asked, “Where’re we headed?”

No answer. I hadn’t expected one. Nothing in the message delivered to my office this afternoon had hinted at my destination. The recording had been verbal only, with no signature, just that huge sum of credit that transferred to my account as soon as I accepted the job.

I pulled the safety mesh around my body. I was a slender woman, more muscle than softness, and the webbing had to tighten from whoever had used it before me.

“Ready?” the pilot asked. He was intent on his controls, and it took me a moment to realize he had spoken to me rather than to the flycar.

With no warning, g-forces slammed me into the seat like a giant invisible hand. The chair did its best to compensate, but nothing could gentle a kick that big. A noise rumbled through the vehicle that I wouldn’t have believed if I hadn’t heard it. Rockets had just fired. This “flycar” was a damn spaceship.

The pressure built until black spots filled my vision. The webbing pushed against my body, countering the effects, but I still felt dizzy. Pinwheels spiraled in my vision and bile rose in my throat.

As soon as the pressure eased, I said, “Where the hell are we going?”

I didn’t know how fast we were traveling, but given that rocket blast, we had to be moving at a good clip. We were still accelerating, less than before, but enough to feel the effects. A few hours of this could take us deep into the solar system.

I regarded him uneasily. “I don’t suppose this flycar has inversion capability?” It was halfway to a joke. Starships went into inversion to circumvent the speed of light, which meant they could end up anywhere in space, light-years from here. A vehicle would only need such engines if it were leaving the Parthonia planetary system, which of course we weren’t going to do.

The pilot looked back at me. “We invert in six minutes.” 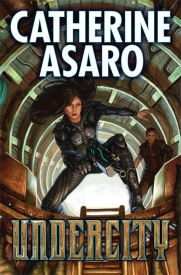