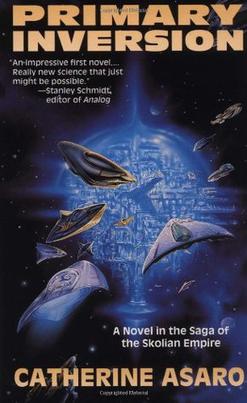 Book 1 in the Saga of the Skolian Empire

Founded by the Ruby Dynasty, the Skolian Imperialate rules a third of the civilized galaxy. But war with the rival Trader empire looms, a conflict that can only lead to slavery for the Skolians or the destruction of both sides. When Soz Valdoria, an fighter pilot and daughter of the Ruby Dynasty, meets Jaibriol Qox the Second, the Trader emperor’s heir, all bets are off. With hostile forces seeking their capture or death, Soz and Jabriol must work together to find salvation for their people before war destroys them all.

Asaro rewrote the eBook version of Primary Inversion, polishing the original, and considers it the best version.

“An imaginative debut that takes off at a frantic pace, with dazzling technology, stirring battles and mental hijinks … plenty of energy and invention.”—Kirkus Reviews

On the Skolian Empire series:

“One of the major series in the genre.” —SF Chronicle

“Asaro’s Skolian saga is now nearly as long and in many ways as compelling as DUNE, if not more so.” —Booklist

Book 1 in the Saga of the Skolian Empire 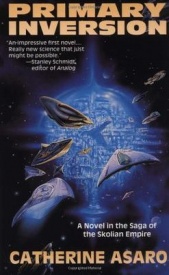