Book 9 in the Saga of the Skolian Empire

Catherine Asaro has won widespread acclaim for her innovative blend of cutting-edge physics, interstellar intrigue, and adventure romance. In 2002, she won the Nebula Award for Best Novel for The Quantum Rose, a novel in her Saga of the Skolian Empire. Skyfall offers the perfect chance to introduce new readers to this epic SF series, here’s the perfect chance. It goes back to the beginning, telling the story of how a chance meeting on a backwater planet gave birth to an interstellar dynasty.

Eldrinson, a provincial ruler on a primitive colony, struggles with his inner demons. But when he meets Roca, a mysterious woman from the stars, he whisks her away to his mountain retreat. His action changes an interstellar empire, causing a war but also giving new life to a dying dynasty. Revel in the grand adventure of this Nebula Award-winning series.

Book 9 in the Saga of the Skolian Empire 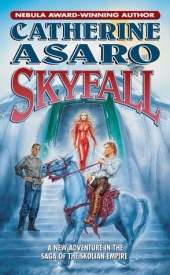