Book 8 in the Saga of the Skolian Empire

With The Moon’s Shadow, Catherine Asaro begins a thrilling new chapter in her galaxy-spanning epic of the Ruby Dynasty.

At the age of seventeen, Jaibriol Qox III becomes ruler of a vast galactic empire—and loses everything he values. Born of a secret liaison between an heir of the Skolian Imperialate and a prince of the genetically engineered Traders, Jai Qox grew up in exile. Now he must walk a razor’s edge, to seize the power of his birthright without succumbing to its dark seduction. Only then can he avert a war that threatens to engulf a thousand worlds.

Book 8 in the Saga of the Skolian Empire 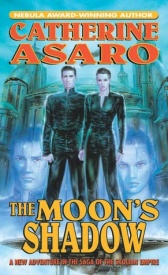